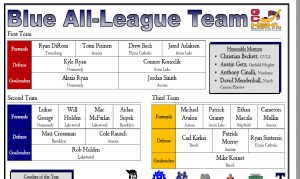 Congratulation to senior Hockey captains Drew Beck and Ryan Sustersic for being named to the All League Team (Blue) of the Greater Cleveland High School Hockey League. Beck was named a First Team Forward and Sustersic was named Third Team Defense.

They will be honored before the Baron Cup Blue Championship Game this Sunday. The Panthers will take on the Normandy Invaders next Sunday, February 18th at 2:30 at Brooklyn Rec in the Brooklyn District Playoffs.